Steve Bell, President & CEO of Bellmont Cabinet Company started his company in his garage in the 70’s and built it into a 200-employee, $30 million-a-year maker of high-end cabinets. Then he had to rebuild it again when “the high-rise business went away” with the recession and revenue plunged 60 percent. His sons are now a key part of the Bellmont tradition as it now reaches to almost 300 employees. 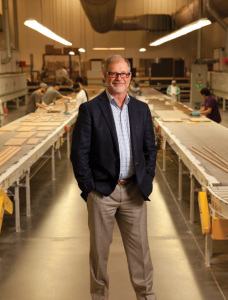 Steve Bell built Pacific Crest Cabinets into a 200-employee, $30 million-a-year maker of high-end cabinets — the kind found in high-rise developments. Then he had to rebuild it when “the high-rise business went away” with the recession and revenue plunged 60 percent. Employment dropped to 90, those who remained faced wage cuts and shorter hours. “We’d never been through anything like this before,” Bell recalls. “The market simply wasn’t coming back.”

Bell’s answer was to shift to a more affordable, contemporary product. And it worked. “We just hit it out of the park,” Bell says. Sales are expected to be in the mid-$40 million range (from a recessionary trough of $13.6 million), the firm is building 500 cabinets a day and shipping to 40 states, and employment is back to 250. Rebranded as Bellmont, though the parent company is still Pacific Crest Industries, it’s also rolling out a private-label line for Lowe’s. “We’re a lot more frugal,” Bell notes. “We’ve learned some really tough lessons about what do we need versus want.” Praising employees for being “all in with me,” he adds, “We all just sucked it up and survived.” 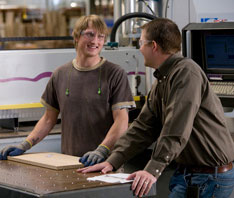 Bell’s employees share those lessons about resilience through a project in which the firm sends workers and resources to help build a village in El Salvador, adding homes, a school, a water system and electricity. “It’s been as rewarding for our companies and our employees as it has been for the community,” Bell observes.